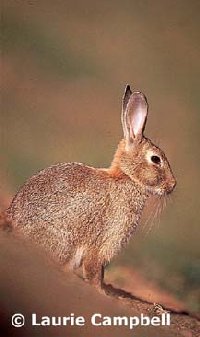 Name for herbivorous mammals of the family Leporidae, which also includes the hare

The European common rabbit, Oryctolagus cuniculus, is native to S Europe and Africa, but is now found, in its domestic varieties, throughout the world; wild varieties have also been introduced in some places, such as England. All domestic rabbits, including the so-called Belgian hare, belong to this species.

Wild common rabbits are up to 16 in. (41 cm) long and usually weigh 2 to 3 lb (0.9-1.4 kg). They have soft, thick fur, usually grayish brown above and white below. The tail is usually carried upright when the animal runs, exposing the white undersurface. Common rabbits live in elaborate systems of adjoining burrows called warrens. The young are suckled in a special burrow, dug by the mother at a distance from the warren and lined with a nest of her own fur. The entrance to this burrow is plugged with earth when she is away.

The Language of Sounds

The sounds of wild rabbits, like those of domesticated rabbits, are almost always very soft and tentative. Often you will have to listen very carefully or you won't hear them at all.

Violent gnashing of teeth, in combination with a dull, listless gaze and general apathy: Always a sign of great pain, caused, for example, by tympanitis. Not to be confused with:

Faint grinding noise produced by jaw movement: An expression of contentment, this sound is produced primarily when the back of the rabbit's neck is scratched. It is more pronounced in some rabbits than in others.

Spitting: Always a sign of aggression. A brief spitting sound may precede an attack. It has little similarity to the spitting noises made by cats, however.

Brief growling: This sound usually is produced by bucks shortly after mating.

Cooing: Dwarf does often coo when nursing their young, and rabbits may produce this sound when communicating with each other, if they feel safe, sound, and secure. The range of sounds is quite broad, and the noises are similar to the cooing of doves, although the rabbits' cooing is less even and deeper in pitch.

Rabbits have two scent glands that they use to mark objects. One, under the tongue, releases its scent (pheromones)-not detectable to humans-through several pores located beneath the chin. The other gland is near the anus. Rabbits also spray urine to mark objects and areas.

1) Rubbing objects with the chin: This is the rabbit's way of designating its territory and announcing to all other members of its species "I live here. This belongs to me!" Wild rabbits mark rocks, twigs, landmarks, and burrow entries and exits. Rabbits kept as household pets will mark table and chair legs and their cage, food dish, and sleeping house. A rabbit feels safe and at home in surroundings it has marked. Territories that are unmarked or marked by other rabbits, however, make the animal extremely unsure. Dominant bucks and does do the most marking.

3) Urine Spraying: Bucks spray with urine to express ownership and to mark territory. Both males and females also spray urine when frightened or as a defensive gesture.