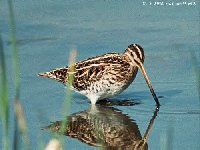 The Common Snipe is a small to medium sized wading bird. Shorter legs and neck distinguish it from other waders. It is generally 26.7 cm (10.5 inches) long, with a long, straight, slender bill about 6.4 cm (2.5 inches) long. In flight the Snipe displays the long pointed wings characteristic of wading birds. The female typically weighs about 115 grams. The male snipe is larger, generally weighing about 130 grams. The adult snipe has a brown body that is striped with black. There is black stripes across the eyes, which are set back on the head, away from the bill. The adult has a black bill, and legs that are olive in colour. The female of the species is similar in coloration to the male. The down of the juvenile snipe is marbled brown and black, which provides excellent camouflage. This down is striped with black and speckled with white. The legs of the young bird are greyish, and the bill is black (Burton and Burton, 1970; Peterson, 1961; "Birds of the Great Lakes," on-line).

Food Habits
The Common Snipe consumes mostly worms. However, it also feeds on insects, crustaceans, and molluscs, as well as occasional seeds and berries. The snipe feeds in the muddy shallows at the edge of lakes, streams, and ponds, or in swamp mud. The bill of the Common Snipe is specially adapted for the type of food it consumes and the habitat in which it lives. It is able to open the tip of its bill while the entire bill is underground. This unique adaptation allows the bird to eat small animals without having to pull its bill out of the mud (Burton and Burton, 1970; Peterson, 1961).

Reproduction
The breeding season of the Common Snipe spans from the middle part of April to August. The male snipe lures females by using a distinctive technique called "drumming." Early in the breeding season, the female snipe may have many mates. As the season passes, however, the female will settle in with one mate. The eggs of the Common Snipe are olive-brown in coloration and spotted. The eggs are typically about 39 by 28 mm in size. The clutch generally consists of four eggs. Incubation lasts approximately three weeks. Parents share the responsibilities of feeding the young. The adults divide the brood in half and each adult cares for half of the chicks. This goes on for approximately two weeks, when the chicks begin to fly (Peterson, 1961; Burton and Burton, 1970, "Birds of the Great Lakes", on-line).

Behaviour
The Common Snipe is a migratory bird. North American snipes often spend winters in South America. Eurasian snipes migrate to Africa during the colder months of the year. The flight path of the Common Snipe is characterized by an irregular or "zigzag" pattern. The courting ritual of the Common Snipe is often referred to as "drumming." The bird making a rapid descent, while slowly beating its wings, and spreading its tail feathers accomplishes this drumming. The sound produced is a distinct "drumming" noise. (Burton and Burton, 1970; Peterson, 1961).

Habitat
The Common Snipe can be found in open areas with enough low vegetation to provide cover. These areas include marshes, canals, stream banks, bogs, and wet meadows, and even Arctic tundra. Nests are generally grass-lined hollows in wet meadows, or marsh (Burton and Burton, 1970; Peterson, 1961).