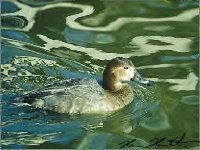 The Pochard is a diving duck. The male Pochard looks as if he has a black body but most of this is wrapped up in a copious pale grey bandage. His rich red head is also distinctive. Female Pochard can be harder to identify, but there is usually at least a hint of grey

brown on their mantle and flanks and their faces usually show pale blotches, especially in front of the eye. In flight, both sexes show uniquely grey-brown wings, paler across the flight feathers.

Pochards favour waterweed, as well as water insects, molluscs and
crustaceans. It dives to find much of its food.

Breeds on large reed-fringed lakes. Winters on lakes, reservoirs and in sheltered bays

Pochards are uncommon breeding birds, largely restricted to east England and Scotland. In winter, however, they are extremely common and can be found on larger stretches of inland water.Pochards are widespread and easily encountered in central and southern Europe.